We at Amberen, pride ourselves in the 45 years of scientific research on our primary ingredients and passionately believe in helping all women going through menopause. The scientific foundation that supports Amberen’s effectiveness and safety is substantial, which includes multiple clinical studies on menopausal women.* Since 2007, it’s been our mission to make every woman’s transition as symptom-free as possible.

“Amberen is a safe non-hormonal option for my patients suffering from hot flashes, night sweats, mood swings and other menopausal symptoms.” 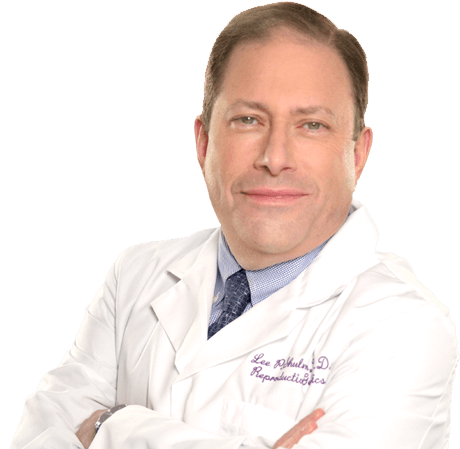 “Amberen is a safe non-hormonal option for my patients suffering from hot flashes, night sweats, mood swings and other menopausal symptoms.” 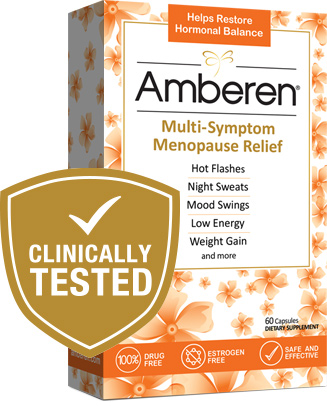 A published 12-week randomized, placebo-controlled, double-blind study on women, between 42-60 years of age with mild to moderate menopause symptoms, showed Amberen to be an effective, safe and well tolerated supplement.† The below percentages are the clinically shown results from the study.*

Small doses of amber (succinic) acid were used to rejuvenate the hypothalamus by restoring its sensitivity.

V.M. Dilman, V.N. Anisimon, and M.N. Kondrashova. The influence of succinic (amber) and glutamic acids on the sensitivity of hypothalamo-gonadotropic system to inhibitory action of estrogens in old rats. Pharmacology and Toxicology 3, 540-551, 1976 (In Rus).

Enerlit-Clima (equivalent of Amberen’s formulation) composition was developed. In preclinical trials, the supplement was shown to be safe (no acute or long-term toxicity) and to be effective for the alleviation of more than 12 menopausal symptoms.

Evaluation of Enerlit-Clima (equivalent of Amberen’s formulation) as a treatment for climacteric syndrome.

Results: The results of the study demonstrated that Enerlit-Clima-based therapy helps alleviate many menopause symptoms when compared with the placebo group. No adverse side effects when taking Enerlit-Clima were registered.

A 3-year-long observational clinical study on 245 women was conducted. Enerlit-Clima (equivalent of Amberen’s formulation) was shown to be safe and effective when it came to managing several menopausal symptoms.

A U.S. patent was granted to Lunada Biomedical (currently Boigix), which had acquired the rights to Amberen’s proprietary formulation in 2006 for a method of synthesizing biologically active succinic acid (Patent No: US 8,546,611 B2. Date of patent: Oct. 1, 2013).

Study design: A 12-week randomized, placebo-controlled, double-blind, study with 102 women between 42 and 60 years of age with mild to moderate menopause symptoms.

Results: Women who took Amberen showed statistically significant improvements compared to the placebo group. The results of the safety evaluation showed Amberen to be a safe dietary supplement.

Presentations: Poster presentation at the 15th World Congress on Menopause. Effectiveness and safety of using Amberen supplementation in perimenopausal and postmenopausal women. Yu. Uspenskaya, I. Kuznetsova, N. Borisova, N. Berdnikova and U. Gusak

Study design: A 12-week randomized, placebo-controlled, double-blind study with 125 women between 42 and 60 years of age with mild to moderate menopause symptoms.

Results: Amberen was shown to be a safe and well-tolerated supplement with no adverse side effects. Compared to the placebo group, women who took Amberen reported significant improvements in many menopausal symptoms.

Data from two trials were pooled in order to continue to evaluate and further confirm Amberen’s efficacy. The analysis of the larger data set showed that Amberen relieves 16 menopausal symptoms.

Amberen is an innovative, clinically tested dietary supplement that helps relieve most common symptoms of menopause by restoring hormonal balance. Amberen’s proprietary blend of succinates, amino acids, minerals, and vitamin E has been clinically shown to stimulate the production of female hormones without any adverse side effects.** Amberen’s benefits are backed by double-blind, randomized, placebo-controlled, human clinical trials on menopausal women and over 45 years of scientific and clinical research on the main ingredients.* Amberen does not contain any hormones and is not a hormone replacement treatment. Amberen is not a prescription drug.
Amberen provides single relief for common perimenopause and menopause symptoms. Symptom relief includes the following: hot flashes, night sweats, mood swings, low energy and fatigue, sleeplessness, difficulty concentrating, irritability, menopausal headaches and stress, lack of sexual interest, muscle and joint aches, plus menopausal weight gain.*
Menopausal symptoms are caused by age-related decline of estrogen. If taken as directed, Amberen targets the root cause of menopause and restores hormonal balance by stimulating your body’s natural production of estrogen,† with no adverse side effects.**
Amberen is an innovative dietary supplement because of its unique and proprietary ingredients and mechanism of action. Unlike other products, Amberen targets the underlying cause of menopausal symptoms by restoring hormonal balance and with no adverse side effects.** It contains no hormones, soy, black cohosh, or other herbs. Multiple clinical human studies on its formulation showed that Amberen is effective for perimenopause and menopause. Plus, Amberen uniquely offers women free consultations via NurseAid. NurseAid is a complimentary phone consultation service provided by Amberen and is comprised of a team of professionals led by a licensed nurse.
Yes. Amberen has been tested in three randomized, double-blind, placebo-controlled human clinical trials. Additionally, Amberen is backed by over 45 years of scientific research. Read more about the science behind Amberen here.
Amberen is not a weight loss product. Amberen’s most recent clinical studies have shown that it helps manage weight gain during menopause when taken as recommended for 90 days.* It is recommended that Amberen be taken in combination with enjoying a healthy diet and exercise.
Amberen is a proprietary blend of succinates, amino acids, minerals, and vitamin E. Amberen’s main ingredients are produced via a U.S. patented manufacturing process that guarantees their unique bioavailability. Amberen ingredients are as follows: ammonium succinate, calcium disuccinate, magnesium disuccinate, zinc difumarate, glycine, monosodium L-glutamate, tocopheryl acetate. Amberen is available in gelatin capsules. For more information about Amberen ingredients, please click here.
No, Amberen doesn't contain estrogen or soy. Amberen also does not contain black cohosh, herbs, or maca. 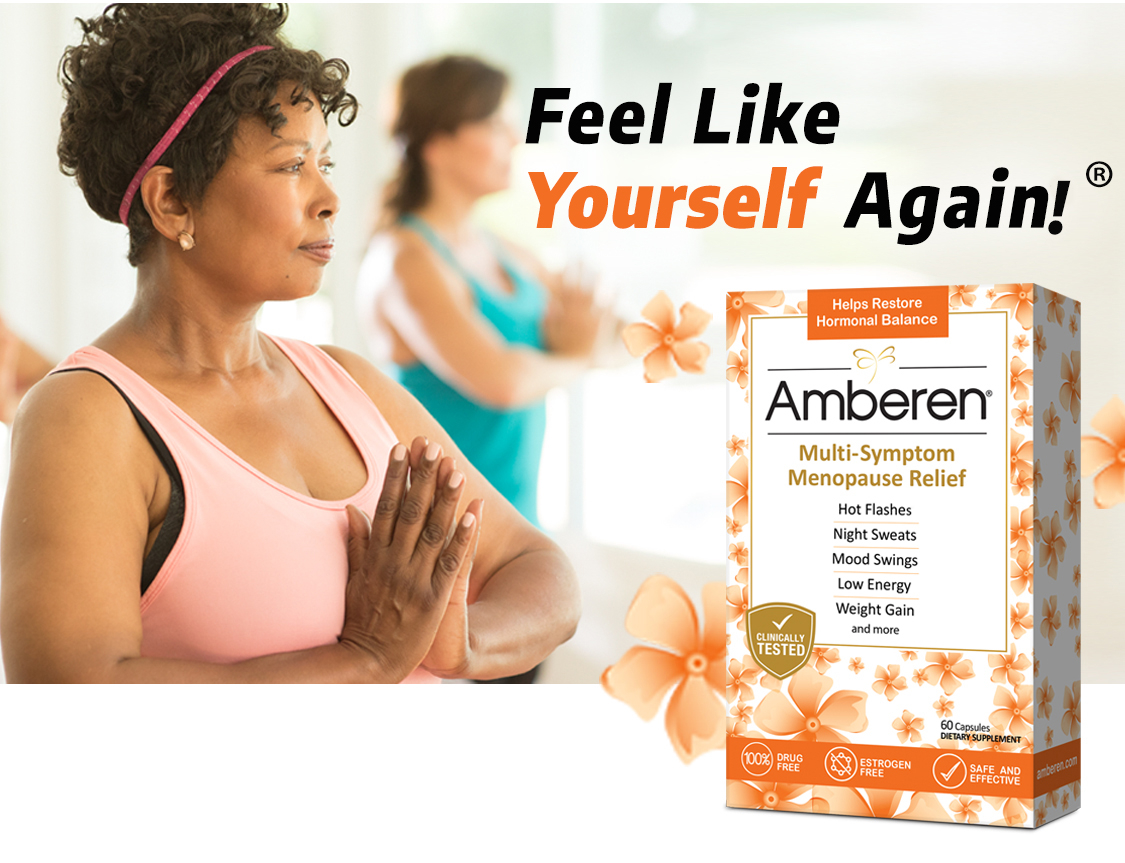 †The statements on this website have not been evaluated by the FDA. This product is not intended to diagnose, treat, cure or prevent any disease.

* Every woman is unique and every woman experiences menopause and its symptoms differently. Every woman's experience with Amberen will be unique as well. The statements we make regarding Amberen's menopausal symptom relief benefits are supported by the results of ingredient manufacturer sponsored randomized, double-blind, placebo-controlled, human clinical trials, including two recent clinical trials dating from 2014-15 and 2015-16, involving 102 and 125 menopausal women, aged 42-60 years, with mild to moderate menopausal symptoms, evaluating the efficacy of Amberen® in the treatment of climacteric complaints over the course of 90 days. Both of the studies' results showed that Amberen helped restore hormonal balance by supporting the endogenous production of estrogen and that when compared with placebo users experienced statistically significant relief from common menopausal symptoms, including, but not limited to, hot flashes, night sweats, irritability, mood swings (as measured by relief from “feeling unhappy and depressed”, “crying spells”, and “loss of interest in most things” symptomologies), weight management (as measured by changes in weight, BMI, and hip and waist circumference analyses), difficulty sleeping, stress and anxiety, difficulty concentrating, fatigue and low energy, headaches, muscle and joint aches and loss of sexual interest. Statistically significant results typically occurred between 30 through 90 days of continuous use. (Radzinskii, V. E., et al. Gynecological Endocrinology 32.sup2 (2016): 64-68. Radzinski V. et al., Menopause. Vol. 24, No. 12 (2017): 1456-1457. Kuznetsova et al., Obstetrics and Gynecology (2016) 5:126-33).

** No adverse side effects were observed during clinical studies. Caution: Amberen is not intended for use by pregnant or nursing women. Do not take if you have severe hypertension. If you are taking prescription medication or have any medical condition, consult your doctor before use. Discontinue use and consult your doctor if you have any adverse reaction.

‡ Individual results will vary. Mary Lou Retton is a paid Amberen spokeswoman and her testimonials are based on 90 days of continuous use. Photos and videos are of actual Amberen customers who were compensated for their participation. Regarding the endorsements and testimonials provided on this website, please note that while they represent individual, real life experiences of women who have used Amberen, they are individual results and may not reflect the typical results that other users will experience. We do not make any claims or assurances that these individual experiences represent the typical results that Amberen consumers will achieve. See * above for information regarding typical results as shown in clinical trials. These endorsements and testimonials are provided as a means for customers to share their experiences using Amberen with other women and are not provided or intended to be interpreted as claims that Amberen will provide the same benefits to all customers. The endorsements and testimonials are displayed verbatim except where edited for privacy reasons, length or to correct grammatical or typing errors, and not all endorsements or testimonials are shown in their entirety as privacy concerns, space availability and relevancy at times require minor editing prior to being displayed. Endorsements and testimonials are never edited, however, in a way that would change their substantive meaning or essence. Amberen.com uses www.resellerratings.com to manage its customer reviews and does not manage the reviews on any retailer site. Average lifetime star rating on ResellerRatings for Amberen as of 01.09.20 is 4.5/5 stars based on 1,370+ reviews. See 1,000+ 5 Star online reviews as of 01.09.20 on ResellerRatings.com, Costco.com, Amazon.com, Facebook.com, Walmart.com, Walgreens.com, Trustpilot.com. Overall average ratings will vary on each online review platform.

◊ Based on survey conducted on www.amberen.com between July and September 2015 of 1103 actual Amberen customers who completed a 90-day course who responded "Yes" to the question "Did Amberen work for you in relieving menopause symptoms?"